Rolling Start Inc. office is under construction. Because of this, next week’s cooking class on 4/18 is cancelled. Stay tuned because our offices will be reopening to the public very soon! We are renovating our offices so they will be ready to welcome our consumers back into the office. We will keep you updated when renovations are complete and covid restrictions are lifted. Thank you for your patience!

“M. Lisa Hayes, 60, of Bellflower, has been appointed Chair of the State Independent Living Council, and has also been appointed to serve on the State Rehabilitation Council. Hayes has been Executive Director at Rolling Start Inc. since 2019. She held several positions at Molina Healthcare between 2007 and 2017, including Associate Vice President of MLTSS, Director of Disability and Senior Access Services, Manager of Senior and Disability Programs and Manager of Provider Contract Review. Hayes was Project Manager at United Health Care from 2000 to 2007. She was contract Manager at PacifiCare Health Systems from 2000 to 2006. These positions do not require Senate confirmation and there is no compensation. Hayes is a Democrat.” – ca.gov

We are very pleased to congratulate our very own, Lisa Hayes, for achieving this appointment to the Chair of the State Independent Living Council(SILC). Go to the ca.gov link here to learn more about the 14 appointments that California Governor Gavin Newsom recently made. To learn more about the council members for the SILC click here and go to the SILC Homepage here.

Keep yourself and your loved ones safe. Schedule an appointment today at www.myturn.ca.gov
if you need any additional assistance, we can help you make your appointment and more!
Call us at one of our offices:
San Bernardino (909)890-9516
Victorville (760)949-7626

Living Well in the Community

LWC courses are back!

Rolling Start Inc. presents:
Living Well in the Community! LWC is a six week workshop for people with any disability who want to set goals to support their overall quality of life and wellbeing. These courses are designed to help you shape your own independent lifestyle of choice by providing you with the knowledge to help set the path and teaching you the skills you’ll need to achieve it. Register today at rollingstart.com/calendar for this 6 part online series
Tuesdays
4/12, 4/19, 4/26, 5/2, 5/10, & 5/17
9:30am-12:30pm
Free lunch will be provided to you for participating. We will arrange a delivery to you at home.

Join us in celebrating #ATAwarenessDay by using the hashtag on social media. If you’d like to learn more, the Association of Assistive Technology Act Programs (ATAP) has created this video to help spread awareness about AT. Additionally, our AT Department is happy to help you get the assistive technology that you may need. Give us a call, we’re here to help!

The April calendar is here!

Be sure to go to our calendar page here to register for any of our classes online! 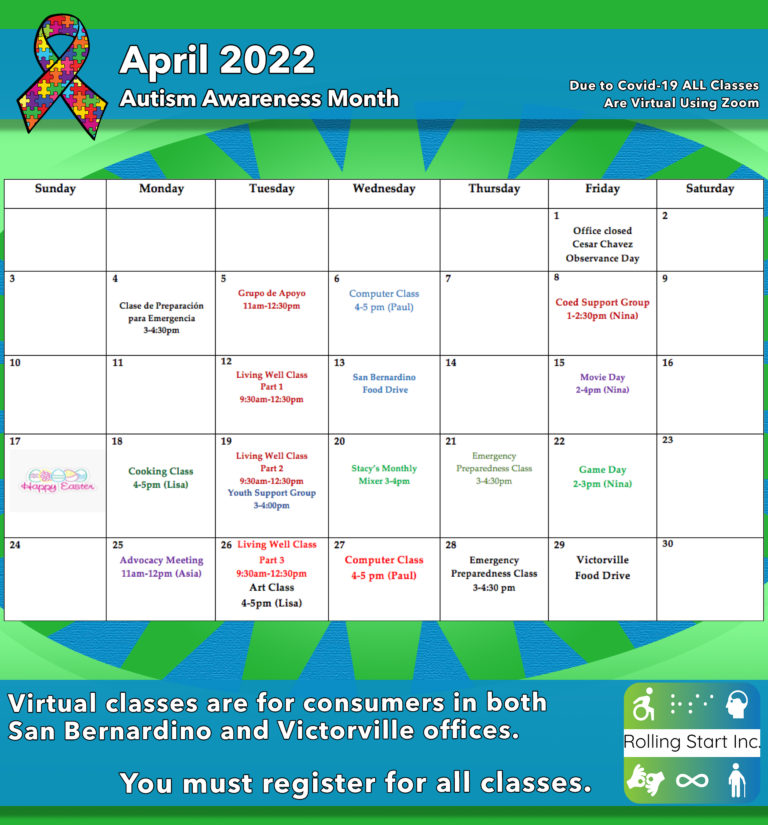